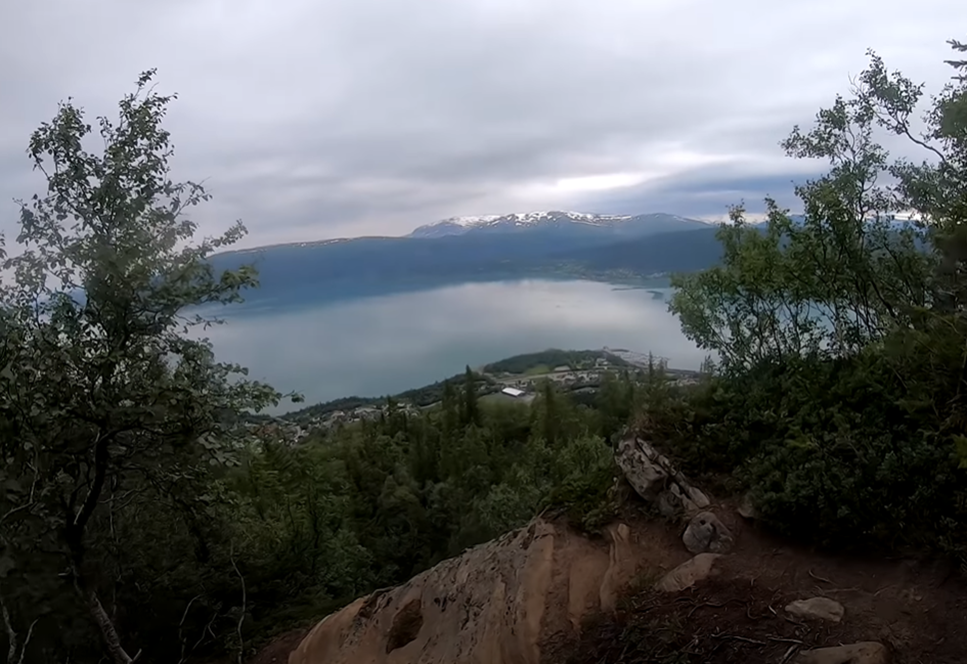 This article provides an insight into the world of recreational GNSS tracking, where British YouTuber GeoWizard has just successfully crossed Norway in a straight line with only his handheld GNSS receiver to guide him.

Introducing the trip across Norway

YouTuber GeoWizard made history when he became the first known person to cross Norway in a straight line on foot, using only a backpack, kayak, and his trusty Garmin GPSMAP 64s. His journey took place in the Rana municipality in Helgeland, where he travelled 27 kilometres from the Swedish border to the south of the Ranfjord, one of the shortest crossings in the country. This route was carefully selected by analysing the possible routes considering the total distance, obstacles faced, and the change in elevation on the possible routes.

This journey was not without peril, GeoWizard crossed reservoirs, scaled a dam, trekked through an uninhabited wilderness, battling through steep terrains, canyons, and finally through the village of Hauknes where he crossed through gardens, the main road, a railway track, and even a football pitch where he tried, but failed to score a celebratory goal as he neared the finish line, with the football bouncing off the goalposts. This is perhaps a fitting metaphor for the entire journey, as GeoWizard had originally aimed to stay within +/- 25 m of the assigned line, but, despite staying on track throughout the vast majority of his journey, he unfortunately towards the end of the journey he registered a deviation of  up to 39 metres in his analysis video

This is not the first time GeoWizard has attempted to cross an entire country in a straight line, with previous attempts being made at crossing Wales, a country much closer to home for GeoWizard, which was unfortunately much harder due to weather conditions and injuries.

In order to successfully track his location throughout the journey, they used a Garmin GPSMAP 64s, a multi-GNSS receiver with a quad-helix antenna. The handheld features a 3-axis tilt-compensation electronic compass to allow a heading to be found even when stationary. As the name suggests, the Garmin GPSMAS series traditionally operate using GPS, although the 64s is able to improve performance by combining GPS with a second set of satellites, in this case, it supports both GLONASS and Galileo. The addition of a second satellite system offers increased performance in challenging environments and faster position accuracy for a minor decrease in battery life. 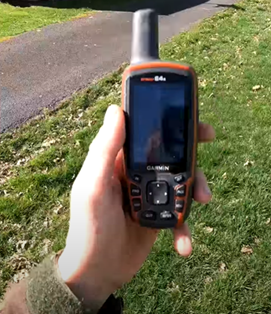 It is unclear which satellite setting was being used by GeoWizard during his quest, however, his personal target of +/- 25 m was chosen in part due to the device limitations. During one of the videos, he mentions that his device is only accurate to within 10 metres, which is approximately right for a recreational receiver set to GPS only when in motion. This is noted as a particular issue during the fourth video on the topic, where GeoWizard analyses the route, it is noted that partway through this journey the ‘straight-line suggested by the GPS deviates with the path suddenly shifting south by X. This is seen in the image below, where the blue line is the route taken and the yellow line is the preplanned route. The image below also includes a purple line, which is a line calculated by examining the video evidence to find when the GPS device itself registered a 0-metre distance from the line displayed on the screen. 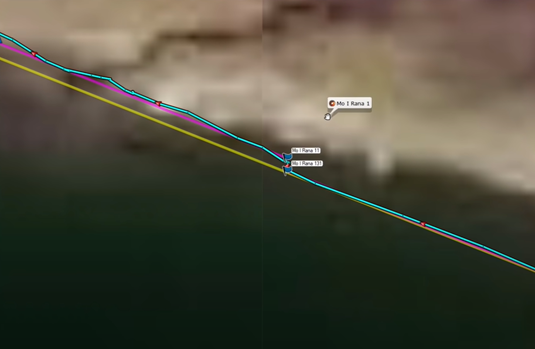 The image above shows a sharp disconnect that happened when GeoWizard changed the batteries in the device. The difference between the line displayed on the screen and the preplanned line is approximately 10 metres at the point of displacement, however, at the time of making the video GeoWizard did not know what the exact cause of this displacement was. This disconnect is the reason why GeoWizard made an analysis video on the topic, as the goal of staying within +/- 25 metres becomes almost impossible if the reading shown on screen is not accurate.

What could have caused this error?

We here at GNSS.asia love all things GNSS-related, and we are using the error seen in the image above in order to help other GNSS users understand the different potential sources of error that can occur when using a recreational model. This serves as a good tool to understand the limitations of these devices, as well as to understand why certain applications require higher grade GNSS devices. This analysis will be conducted using both the suggestions from users in the comments, as well as our own expertise, followed by the explanation presented by GeoWizard.

Could the displacement be caused by using the wrong mapping projection?

Perhaps one of the most common reasons for misaligned map information when conducting any form of analysis using geographical information systems is due to a change in projection when importing the data. As the world is 3-dimensional, it incredibly difficult to map it onto a 2-dimensional space without sacrificing one of the properties. This has resulted in the creation of a whole host of different mapping standards, with there being thousands of different options available depending on the needs of the user. This, unfortunately, means that when working with the import and export of different data it is of utmost importance to ensure that all data imported is using the same projection. In some software packages, if you import data on a new layer it may change the projection from the projection used when collecting the data to the default projection used in the workbook. It is a possibility that the error seen by GeoWizard was caused by data being entered in a different projection, however, in this scenario, it is unlikely, as the same device and worksheet were used to collect and analyse the data throughout, and it is unlikely that the other projection would be so close to the actual values.

Could a reset have caused it to reset to a single constellation setting?

One thing to note is that the discrepancy was seen just after the device had its battery changed. Whilst this wouldn’t change the projection settings, it might reset some of the device settings to the default. The most likely culprit in this scenario would be a change of specific satellite configuration setting. The specific device used has the option to use either just GPS or GPS + a secondary satellite system. This is possible in either direction, with either the system starting in GPS-only mode due to low battery and reverting to GPS + when the battery was full, or it beginning in GPS + and reverting to GPS-only once the batteries have been changed. Of these two options, the second is more likely as the GPS + generally is generally more accurate.

What about the accuracy being improved by GeoWizard remaining stationary?

Examining the contextual clues, it should also be noted that this discrepancy happened at a time when GeoWizard had stood still for several minutes. This means that it may be possible that GeoWizard was actually off track by 10 metres, or that the GPS signal received was inaccurate, as the longer that the accuracy of the device is improved from 10 metres to within 3 metres when stationary for 15-20 minutes. This may have been additionally compounded upon by the fact that the confusion caused by the water level in the area is much lower than expected which will have caused landmarks to appear in the wrong places, meaning that the user could not use them to check the accuracy of the device.

What about the location, what impact does latitude have on GNSS coverage?

It is also important to note that the issue was not seen when analysing the data in the Journey across Wales. This may be because GPS and GLONASS have a poorer coverage of the polar region, meaning that even if GeoWizard followed the exact same procedures in both Wales and Norway, he may have ended up with worse results simply due to the northern location of this successful attempt.

Galileo is potentially the solution to this problem

According to Norsk Romsenter, the Norwegian Space Agency, Norway objected to the initial constellation plan after a simulation of satellite orbits identified a better placement that had better performance in the poles. Galileo not only has better coverage in polar regions but, it also has better overall accuracy, as when it is fully operational Galileo is expected to provide your location to within 1 metre, which would enable recreational users such as GeoWizard to more accurately plot his journey next time he crosses a country in a straight line.

If waiting until Galileo is fully operational is not possible, the next generation of Garmin devices such as the GPSMAP 65, 65s, and 66sr handhelds are multi-band, multi-GNSS receivers capable of using not only GPS, GLONASS, and Galileo, but also QZSS and IRNSS, regional GNSS’ based in the Asia-Pacific region. This new generation of handhelds now only use the L1/E1 frequency bands but also are able to use the L5/E5a bands as well. These additional bands will result in an increase in positional accuracy and faster positioning, decreasing the chance of an error like this occurring and increasing the potential uses for these devices in a greater array of applications.

So, what actually caused the problem?

Following the release of the analysis video, GeoWizard uploaded a new video to announce the cause of the displacement shown in the previous video. In the video dated 25 January, GeoWizard came to the same conclusion that it is possibly a map projection error that was caused by him using Google Earth to plan the route. As Google Earth provides you with a three-dimensional view it is not subject to distortion due to mapping projections, after all, mapping projections are a tool to project a 3D image onto a 2D map.

This revelation caused him to remeasure his distance from the planned route, as when he plotted his actual walked path he had taken on Google Earth it became apparent that he had managed to stay within the original target of +/- 25 metres.

What are the key takeaways to remember?

Although this article has focused on recreational GNSS applications, it has many lessons that are important to remember for the entire GNSS community, namely that mapping projections are not something that should be taken lightly and that if possible, multi-constellation devices are preferred due to their higher performance.

Alongside this, one key operational consideration is to ensure that you are using the same tools and techniques throughout the problems, if GeoWizard had used Google Earth to both plan and analyse the results, he would not have experienced these problems.

GeoWizard’s journey across Norway can be seen here, with his analysis video being found here.

If you want to find out more about GNSS trends and developments, subscribe to our newsletter or contact the GNSS.asia team at hello@gnss.asia.