Korea’s ambition to be a leader in autonomous driving technologies 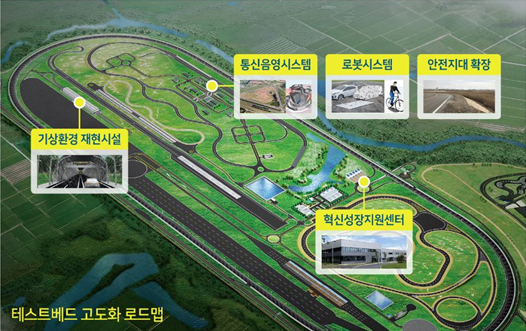 The article dives into the current developments of the autonomous driving industry in Korea with a particular focus on government-led initiatives.

Having come from the field of science fiction, autonomous driving has been increasingly gaining resonance and traction over the past decade. With the promising prospect of making roads safer than ever and reshaping travelling and even potentially complete lifestyles, much research on self-driving technologies and their commercialisation is being conducted worldwide. Currently, mass-produced “level-2” autonomous driving cars only assist drivers in preventing lane departure and maintaining a safe following distance. In contrast, the fully autonomous “level-4” technology, which is still under development, recognises and judges the situation surrounding the vehicle and minimises the driver intervention. Naturally, the build-up of the future car technologies will be primarily focused on a “level-4″ autonomous driving research and development (R&D) infrastructure.

To achieve the world’s highest level of fully autonomous driving cars, the South Korean government has decided to invest € 830 million over the next seven years into a framework R&D project consisting of 30 key missions and 84 sub-projects. The framework project titled “Autonomous Driving Technology Development Innovation Project” finally passed the preliminary feasibility study on 24 April 2020. The study refers to a cost-benefit analysis before a large-scale national project to evaluate the likelihood of meeting the objectives within the budget. The project has been proposed as a joint effort by multiple government ministries – led by Ministry of Trade, Industry and Energy (MOTIE), but also with participation from three other ministries, i.e. Ministry of Science and ICT (MSIT), Ministry of Land, Infrastructure, and Transport (MOLIT), as well as National Police Agency (NPA). The approval of the initiative reinforces the mid- to long-term comprehensive R&D strategy to stimulate the country’s ‘Big 3 Industries’ – semi-conductor, bio-health, and future mobility (eco-friendly vehicles as well as autonomous vehicles).

To take on the vast array of tasks on the way to the “level-4” autonomous driving, the framework project focuses on five new convergence areas:

In addition to technology convergence, autonomous driving should create services and stimulate new industries to be sustainable. It also has considerable potential for addressing social issues – for instance, upgrading public transportation to give better access to the weak. Lastly, the autonomous driving ecosystem should be set up to develop technologies for safety evaluation, security and standardisation-related issues, legal support, and so on.

The framework project is not the first autonomous driving initiative South Korea has launched in recent years. In 2018, the Korea Automobile Testing and Research Institute (KATRI) opened K-City, a pilot test site where self-driving vehicles could be tested in a real road environment. It was set up, in the 360,000 square-meter area, to simulate diverse and realistic driving conditions ranging from urban and rural areas to the motorway and parking places. There, autonomous vehicles face many different driving situations, including crossroads with traffic lights, bus-only lanes, bus or taxi stops, pedestrian or bicycle paths, tunnels, and toll gates.

With the experience collected in the controlled environment, the plan now is to implement fully autonomous driving on major roads across the country. The Korean government strives not only to lead the global technology competitiveness of domestic companies and the creation of future service industries but also to achieve a profound ripple effect of industrial technology and social culture through traffic cognition mitigation, the establishment of safety and certification standards, and implementation of hyper-connected society.

Professor Jong-Hoon Won is Associate Professor of Electrical and Computer Engineering, Inha University, South Korea. He is currently in charge of the department’s Autonomous Navigation Laboratory (ANLab), one of the leading labs in Korea in the field of GNSS-based navigation and its applications to autonomous driving vehicles (http://autonav.inha.ac.kr). The ANLab has been a consortium member of the “Future Vehicle R&D Specialist Education Programme” since 2017, that has been led by Korea Electronics Association (KEA), conducting R&D that meet the demand on the field and develop educational infrastructure on future mobility. Anticipating growing demand for highly skilled researchers and engineers in the future mobility sector, ANLab is playing a crucial role in building up educational capacity for self-driving technologies and GNSS-based applications.

Other posts
One year of success for QZSS (Michibiki) in Japan
READ MORE
Gaining an edge in the autonomous driving industry: Geely’s aspiration for a satellite constellation
READ MORE
Expanding into Asia: a perspective by FairFleet – an EU drone start-up
READ MORE
Japan’s future mobility trends: caught between the past and the rest of the world
READ MORE